« Entrepreneurs, specialists in different fields of knowledge and professions change the world, they have one common feature — the ability to combine production factors into a single process and organize the production of goods and services demanded by the market...      » 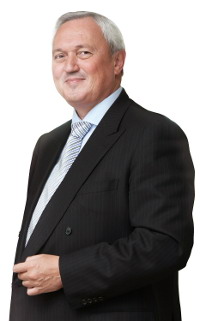 In 1995 Vasiliy defended a dissertation in Central Economic and Mathematical Institute, Russian Academy of Sciences for academic degree of Doctor of Science, Economics. Member of the International Academy of Ecology and Life Safety.

Winner in the category “Financial Services” of the competition “Entrepreneur of the Year 2003”, organized for the first time in Russia by “Ernst & Young” (Ernst & Young).

Winner of the silver prize in the international competition “2007 FT Sustainable Banking Awards” in the nomination “Sustainable Bankers of the Year”.

In 1991 — Director of the Center of Economic assistance for transition to a market economy under the administration of the Rostov region. In 1997-98. — General Director of Federal Fund for the Support of Small Enterprises.

Since 2002 — Chairman of the Board of Directors of JSCo CB “Centr-invest”.

Repeated participant of the World Economic Forum in Davos, the annual meetings of the World Bank, the European Bank for Reconstruction and Development and other international economic forums.

Bank “Centr-invest” — the largest regional bank in the South of Russia, providing a wide range of services to corporate customers, entrepreneurs and citizens in accordance with international standards of modern banking technologies. The bank is one of the largest banks in the Rostov region, accounting for over a third of the total capital, more than 40% of assets, credit investments and deposits of Don banks. As part of the bank’s branch network, “Centr-invest” has 140 offices in Rostov and Volgograd regions, Stavropol and Krasnodar territories, as well as representative offices in Moscow and London.

Since 1997, the Bank “Centr-invest” has been auditing in accordance with International Financial Reporting Standards of the company PricewaterhouseCoopers.

Bank “Centr-invest” constantly innovates, develops products and services for the public, small business, agrobusiness, energy efficiency in Russia, improves its operating system in order to multiply all these advantages, and in accordance with its mission, to provide banking services to the public and businesses in Southern Russia on the basis of international standards and modern banking technologies.

Author of more than 250 works on the problems of economy of transitional period, privatization, entrepreneurship and regional economics, including: “Privatization: Step by Step” (1993), “Potential of reform of the Don Region” (1993), “Privatization in Russia: The way to wealth? ... to bankruptcy? “(1994),” Investment activity in privatized firms “(1995, with co-author),” NON-PAY-MENT: enterprise management in the conditions of non-payment “(1996),” Life in the open Don: socio-economic review “(1996),” Banking technologies of support of Don small Businesses “(1997),” Five years of reforms on Don “(1997),” Credit Policy of Rostov Region “(1999),” Small Business: made in Russia “(1999), “RSUE: the origins of reforms” (2001), “Small Business of the South of Russia: investment potential” (2002), “Billion Dollars of Don investments” (2003), investment attractiveness of the South of Russia (2006), Access to the global economy: Guide for Small Business (2006), South of Russia against the global crisis (2009), Small business: entrepreneurial general education for pupils (2011).